Just added to your cart

CoasterFRAME is the newest functional art to hit the crowdfunding platform
By: U Platon
CHINO HILLS, Calif. - Oct. 21, 2020 - U Platon, a company that creates simple but unique products to extend human limits, announced today the launch of a new Kickstarter campaign to raise funds for a novel product designed to organize and display art coasters. 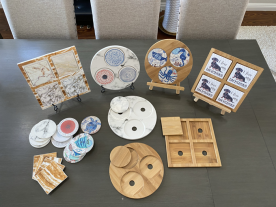 CoasterFRAME by U Platon is a one-of-a-kind, patent-pending multi-functional art frame for displaying and storing decorative drink coasters. The coasters can be inserted into the frame, which transforms into a trivet or art plate.

In order to raise funds to release the product, U Platon has launched a Kickstarter campaign with a goal of raising $6,000 by Monday, November 30.

Through the campaign, backers can receive limited-time perks including options to preorder discounted CoasterFrames, with the products expected to ship in March of 2021 pending the success of the Kickstarter campaign.

CoasterFRAME's creator, Charles Kim, was inspired to envision a new way to showcase the many artistic coaster designs on the market while also serving the function of protecting furniture from condensation on beverages.

"I noticed that there are so many unique coasters that just end up hidden in drawers or cabinets," he said. "I decided to develop the world's first product that would shine a light on the fun and charming coaster designs in people's kitchens, dining areas, and homes. We are so excited to bring a first-in-class design concept to market through our crowdfunding campaign."

Kim's initial CoasterFRAME designs include three or four spaces for 4-inch coasters that fit into a bamboo or ceramic frame. The frames, which come in round and square options, can double as either a trivet or an art plate, creating an artful home accent.

Kim said more CoasterFRAME styles will be unveiled in the future. In addition, Kickstarter backers have the option to guide the formation of new designs and textures.

View an introductory video about CoasterFRAME on YouTube at https://youtu.be/QaYnkhXZvX8.

For more information about U Platon, go to http://www.uplaton.com.


Contact
Charles Kim
charles@coasterframe.com
Use left/right arrows to navigate the slideshow or swipe left/right if using a mobile device